when terror is unfruitful

January 15, 2016
Most people who live in Jakarta usually have a pretty strong love-hate relations with this cruel yet lovely city. Jakarta is a rough city which will easily bring people down, thus one should be brave and strong enough to be able to nail the rhythm and finally understand the brighter side of Jakarta.

Maybe that is one of the reason why the terrorists are failed to bully Jakartans with their explosions and gunfire, because Jakartans are strong, thus not easily bullied. We are sad and send deepest condolences to all the victims, but we defied the terror, we refuse to be dictated by fear.

On the other hand, Indonesians are the most easily distracted people from across the globe, well explained by this post:


Here are more reasons why terror was unsuccessful to bring Jakarta down:

1. People are more focus to the hero. There are stories about a guy who tried to help to rescue the hostage, or a motorbike taxi driver who rescued a girl during gun shoot. People do not care about the story about terrorism, as we have enough already.

2. Soon after the casualty took place, people share defiant message #KamiTidakTakut (we are not afraid) and more positive messages such #JakartaBerani (Jakarta is brave) and #IndonesiaUnited. 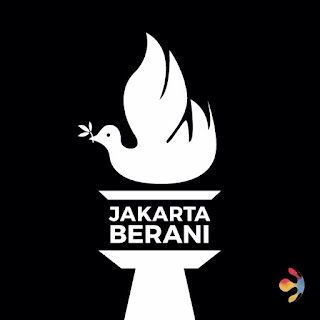 4. Curiosity doesnot always kill the cat. People chose to bear witness the casualty in Sarinah rather than stay away.

5. Street vendor did business as usual.

6. Facebook safety check nowhere to be seen, but nobody made big fuss about it. People don't care. Despite being one of the biggest Facebook user, Indonesians are bigger than Facebook.

7. Girls are distracted by cute police officer who were on duty during the casualty. Later (up to earlier today) the hashtag of #KamiNaksir (we have a crush) became trending topic. Yes, we might be a patriarchal society but we also objectify man. 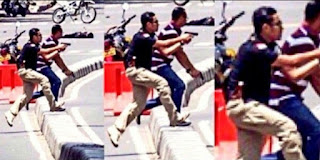 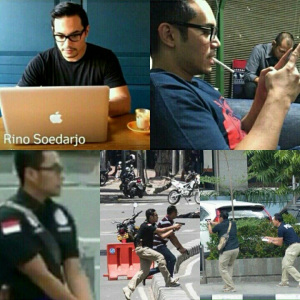 8. Business opportunity! Some online shops started to open order for Gucci sneakers and sling bag claimed as the same product wore by the cute police officer. 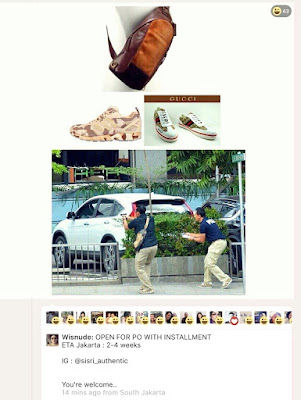 9. Internet is fast enough in distributing meme to mock the terrorist. Our heart breaks, but using humor, people recover quicker. 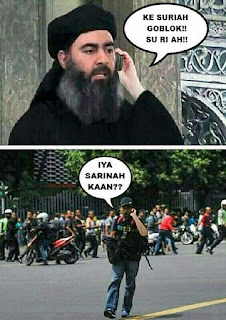 When we laugh at tragedies, we alleviate the tension associated with sudden destruction, we negotiate its absurdity, we ease the emotional chaos and we tame the taboo of death. In case of attacks, we often ridicule the perpetrators to defeat the fear and shock of the event. Experts say that humour after tragedy has four phases. First the morbid humour appears, and while it is often inappropriate, it helps us to process the tragic event. Then people experience distractive humour – supposed to draw our attention from the tragedy and reassure us that everything will be OK. Next comes power humour, which works by ridiculing our enemy and calling for revenge thus making us feel stronger and more powerful. Through identifying the villain or the problem, it rationalizes the tragedy. Finally, connective humour expands  the perspectives taken into account and even begins to incorporate compassionate attitudes.