Showing posts from January, 2014
Show all

This song was on the top of  my 2013 chart. The lyric is so deep, and the music makes me move.  A nice accompany to walk home from the office So pay attention now, I'm standing on your porch screaming out And I won't leave until you come downstairs
1 comment
Read more

January 19, 2014
Ma, My brain gets dizzy when this little boy draws love easily for I forgot how to fall in love. He said, once tongue get freeze, cheeks will blushed quietly, and nobody would forget how to love. Ma, In my eyes has been born weary words, and the sun--that spilled to my coffee             of which I cherished every morning then decayed in every dusk. Ma, This little boy shows me how to embrace love. But he’s nowhere, except for a passing shadow Maybe I shouldn't looking for him. For I become him,             worship inside of him.
Post a Comment
Read more

This chubby bird is ready for sunday! 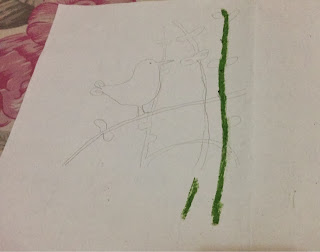 M: I’m starting to really enjoy being alone. It's sometimes hard to find something, but I’m starting to get better and better. Off course it's nice to hang around with people but I thought I was going to feel lonely. R: Travel alone is good to help us find ourselves. Our real selves. Ok, now I'm about to overanalyze. Stop me. Please. Haha  M: No that's very true that’s not over-analyzing.  R: But I'm about to analyze more if nobody stop me.  M: I ain't stopping ya.  R: So, did you find yourself already?  M: I don't know if I will find myself. That's like the end of travelling or something. Or like your life is complete or almost done. Did u?  R: That's a bit tricky, finding self I mean. How do you know whether you already find your real self or not? If one keeps on changing, than you will never find the real self. Because you live with it. With the transformation of yourself.  M: True and I think you constantly change.
Post a Comment
Read more 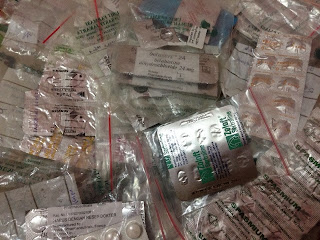 For years, one of my new year resolution is always not to get hospitalized at all. But it always failed. I never knew what’s the real problem with my health. Doctor never confirms anything. Not only my physical health, my mental health was never at the best shape. I drown in depression during 2011-2012. I know I should feel happy with my life, but I didn’t. I kept visiting the hospital again and again. I even hospitalized 4-5 times a year. Those are the worst year ever in my whole life. I couldn’t find anything good about this world. But it didn’t mean that  most of the time I was just mourn, and musing about myself in a locked room. I tried to do as many as activities that I could did, so I have something to pull me out of my room. I join a German language course, I voluntary teach the street children on the railway area, join a futsal club, or just simply registered myself to the nearby fitness center. Not much that I could do at that time, journali
Post a Comment
Read more

January 08, 2014
An ex boy friend  wanted to meet me to have conversation and reminisce the moment that we shared together. For that time might be the last chance for us to meet within several years ahead.  He came to told me that he finally realize why we were not belong to each other. He said we were simply not meant to be together, now he understand why the relationship didn't work, and won’t work. He said that I was right, he used to love the image of me in his head rather than me, myself. Having a particular expectation, then he tried to change me, which somehow work. So I changed, when I was in a relationship with him, according to him, I became something different than my former self. “If I changed, means I became a different person, were I also became not myself? If I were not myself, who is me, and who is myself? Which one is considered as my real self?” I replied. “Your current self is the real self of you. This kind of you, is yourself,” he answered. That'
Post a Comment
Read more
More posts