the end of the world

"I don't know, I guess it's arabic. I don't know the right words to describe it, but it's like the biggest sin ever. Once you are murtad, you will never qualified for heaven. I was taught that a person, as long as he or she believe in Allah, and as long as he or she is a muslim, than he or she is qualified for heaven. They might be putted in hell until some extend, to erase all the sins, and then when they are clean enough, they will be moved to heaven."

"How many hells and heavens then?"

"Well, at least thousands, according to the number of religions, if all of them have the concepts."

"I can't be understood why the objective of living in this world is to prepare the living after this life. That makes us bound to the concept of reward and punishment. Not to the concept of faith, to surrender and believe to the fullest to something beyond. The focus of some religions are to live in the future, then, waiting for the doomsday."

"I never really bother about that,"

"In one of the novel, Murakami said any religion that takes the end of the world as one of it's central tenets is more or less bogus. He said the only thing that ever ends is individual."

"It's more about the value. Like my father teach me how to live, and now I bring his value, my father is living in my life. For example you teach your value to your sisters, or your kids, then they will live carrying your values, and then they also going to teach their value to the generation after them. So you are living in the future even though you are not in the world anymore. Life is a circle, your life is not just gonna end in one point." 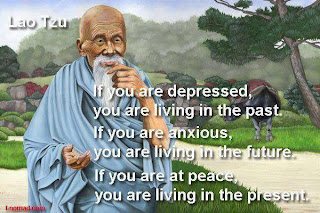 "Words! taoism is my favourite subject. How do you know taoism?"

"I guess we learn about Lao Tzu in primary school or Junior high."

I did some googling after the conversation, this is what he said (well I guess):

From what I found, I understand that the main idea of the Tao is like the idea of Allah, as the one that can't described by human's language. The Tao is a concept beyond reason and logic. It is the universal principle that permeates every action and every phenomenon, but it cannot be adequately understood through the rational mind. To comprehend it completely, we must exercise our intuition and get in touch with the fundamental divinity that connects everyone.
Lao Tzu is also pointing out the limitation of spoken words and written texts. Our tendencies to categorize, define and analyze only give us the limited understanding of how the Tao acts upon the material world. This is exactly what happens when we study physics, biology, chemistry, and other natural sciences.
On the other hand, if we free ourselves of this limiting human desire to put everything into words, and become aware of our wordless communion with nature, we can catch glimpses of a divine wisdom. Beyond categories, definitions, and analyses, it is wisdom far more profound than anything that academic knowledge, science and technology can offer.
definition taken from: http://www.taoism.net/ttc/chapters/chap01.htm (August 1, 2013)

to the people who successfully jumped to their death

July 01, 2019
to the people who successfully jumped to their death was all the pain eventually gone?
Read more